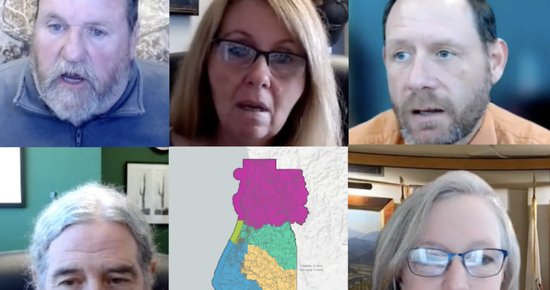 TODAY in SUPES: council chooses to use existing map as basis for redistribution, could make minor changes to lines | Lost Coast Outpost

Most people are quite happy with the existing map of county supervision districts. That was the general consensus of public comment at the County Redistribution Advisory Board, and at Tuesday’s board of supervisors meeting, it was the consensus of the five supervisors.

They voted 3 to 2 to come up with only one card for consideration: the one that has been in place for a decade. The two supervisors who voted “no” – Third District Supervisor Mike Wilson and Fifth District Supervisor Steve Madrone – said they were principally ok with the existing map, but wanted to offer a couple of variations, including maps putting Blue Lake with neighboring Glendale and perhaps one placing Manila in the same district as the towns further south on the peninsula.

Madrone said he spent 10 hours creating his own map using the interface linked to the county’s website, and during the meeting he shared the map on his screen and made his case. . He noted that the other four supervisors all have a significant portion of their constituents living in incorporated towns while his district includes only one of those towns: tiny little Trinidad, with a population of around 250. .

Madrone called this “a blatant inequality in the way neighborhoods are shaped.” The map he created puts Blue Lake back in the Fifth District, where it was before the last redistribution effort ten years ago. It also puts Scotia and Rio Dell together in District Two, among other changes here and there.

But his card failed to gain traction among his colleagues or public speakers. The first district supervisor, Rex Bohn, in particular, was skeptical.

“I don’t know what – other than being selfish – what’s wrong with keeping things the same?” ” He asked.

This was the suggestion he had made from the outset, immediately following a presentation by Paul Mitchell of Redistricting Partners, an independent consulting firm helping to guide the county through the federally mandated redistribution process.

â€œI totally agree to say no change whatsoever,â€ Bohn said, and he made a motion to do just that.

With two more meetings scheduled on this issue – one on November 16 to review the latest changes and another on December 15 to select a final card – Madrone said it was “well premature” to bring such a motion, and a long one. discussion ensued.

Dawn Arledge, executive director of the California Center for Rural Policy, said 81 of 114 comments the committee received (71%) called for minimal changes to the existing map.

Mitchell explained that at the upcoming meeting in two weeks, the board can still consider making small changes to the existing map, even if other maps aren’t presented. Madrone once again tried to push for cards that joined Glendale and Blue Lake in the Fifth or Third District.

But with the assurance that minor adjustments are still possible, the majority of the board was ready to move forward. With a 3-2 vote, the existing Supervisor Map will serve as the basis for deliberations on November 16.

It was another marathon meeting, spread over seven hours, but we can summarize the main decisions made by the board of directors.

At first there was the now standard procession of COVID conspiracy nonsense, with public speakers calling to argue that the county health worker, Dr Ian Hoffman is a liar, as is Dr Fauci, that masks and vaccines are somehow more dangerous than the virus that has killed over 5 million people around the world and 116 here in Humboldt, etc. etc.

Hoffman’s latest written pandemic update was tucked into the consent timeline, but the public comment drew difficult responses and a fact-check from the board and Hoffman.

Dan Berman, who identified himself as a county employee, called to say he wanted the board to show leadership in demanding that all county employees be vaccinated.

â€œIt is unfortunate that so many people in this country and this county are convinced that all of our centuries of health knowledge is wrong,â€ he said. “It’s wonderful that we have a vaccine that protects us from this disease.”

During the afternoon session, council considered an appeal for a civil penalty and reduction measure on a nuisance property located on Elk River Road. Staff told the story of the property, claiming owners Werner, Jonathan and Sara Weltsch made the property an illegal demolition site filled with unwanted vehicles, rusty machinery, tires and buildings, and un-grading. authorized. They also hit back at compliance efforts stretching back years and broke the terms of a deal, staff said.

Jonathan and Werner Weltsch appeared via cellphone video from the cab of a pickup truck to claim the county was in fact wrong. Jonathan said he got a grading permit and took away a lot of the rubbish.

Bohn said he has received complaints about the property since becoming a supervisor and has gone to great lengths over the years to work with the owners. After a few exchanges with the Weltsches, he lost patience as he said, â€œI was trying to help but I’m done. Ended!”

Bushnell asked if the county could give owners 30 days to clean up the property, but Bohn said they have already had ample time to comply. The board ultimately adopted the staff recommendations – that is, the confirmation of the civil sanction – unanimously. The county plans to alleviate the problems on the property at the expense of the owners.

Also during the afternoon session, the board authorized staff to apply for funding of just over $ 18 million from the California Department of Cannabis Control. Planning and Construction Director John Ford explained that while the money is intended to help the cannabis community obtain permits and comply with CEQA, Humboldt County is in a position unique, having processed so many permits, that it can focus on environmental needs.

Planner Michael Richardson said the original idea was to create a loan program to allow producers to pursue water storage projects, but the county was told by the state that a loan program would not be not authorized. It would have to be a subsidy.

The proposal was therefore to award a series of grants of up to $ 40,000 in matching funds for water storage projects and up to $ 20,000 for renewable energy projects.

Wilson has expressed some concerns about liability, saying people could potentially accept the grant money as, in effect, a donation of public funds and then improve their property before reselling and selling it. He offered language to ban this, but Bushnell backed down, saying the industry is too unpredictable to start putting limits on property sales.

Finally, council considered an appeal of a decision by the Planning Commission 4-3 to deny a permit for a new billboard south of Fortuna. Plaintiff Stott Outdoor Advertising, a company that has since been purchased by Lamar Advertising, wanted to build a 480 square foot double-sided billboard near the intersection of Drake Hill Road and the freeway. 101.

Ford made a presentation, claiming the proposed sign was too large (exceeding the maximum allowable size of 300 square feet) and would be inconsistent with the county’s general plan based on the land use of the plot. He also noted that the county is hoping to get the highway. 101 designated as â€œscenicâ€ and therefore should not allow new signs.

A representative from Lamar Advertising gave a PowerPoint presentation and argued their case, but after some discussion, the board voted 4 to 1 to uphold the Planning Board’s decision and reject the posting request. Bohn voted the only “no”.