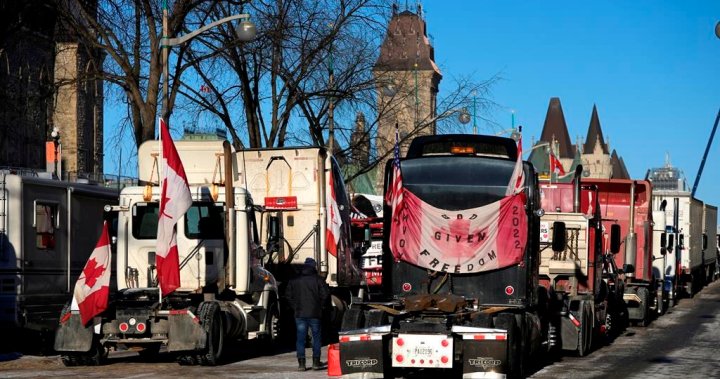 The RCMP told MPs on Monday that it only gave the names of those directly involved in the protests in Ottawa to banks to freeze their accounts, not to supporters who had donated to the so-called Freedom Convoy.

Where is the “freedom” from here? Canadian convoy protests over, but anger remains

RCMP Superintendent Denis Beaudoin told the House of Commons finance committee that banks, building societies and other institutions received ‘different types of information’ from the police database on protesters , based on what was in their records.

He agreed that around 50 to 100 employees of banks and other financial institutions could have seen the information, in response to questions from Tory MP Philip Lawrence, who asked about the sharing of private details from police files and how many people employed by banks and building societies would have seen it.

Angelina Mason of the Canadian Bankers Association said the RCMP, when identifying those involved in the protests, gave the banks “a high-level description of what they believed to be activities” to Ottawa.

The RCMP told the committee that about 257 accounts of people and businesses involved in the protests had been frozen by financial institutions.

RCMP Assistant Commissioner Michel Arcand said the accounts were frozen to encourage protesters in Ottawa to leave and to discourage others from joining the protests.

He said the Emergencies Act’s special account freezing measures were helpful and “encouraged people to leave”.

Arcand says information on those involved in the Ottawa protests was gathered by the RCMP, OPP and Ottawa police before the names were given to the banks.

The Ottawa protests have caused misery for many in the area, with incessant truck horns affecting downtown residents and reports of abuse thrown at those who wore masks.

The Emergencies Act was in effect from February 15 to 23. It was invoked by Prime Minister Justin Trudeau for the first time in Canadian history to deal with the protests.

The act imposed a legal obligation on banks to freeze the accounts of protesters named by the RCMP.

According to Mason, everyone whose accounts were frozen under the emergency laws have now been unfrozen, although some related to court orders may still be frozen.

She said banks were likely to have information on file that indicated an individual’s account had been frozen. However, it was up to individual banks to know how to treat their customers.

She said the banks “had been warned it was coming”, but were unaware of the details of the emergency law until it was released.

Arcand says the RCMP only gave the banks the names of people directly involved in the Ottawa protests to freeze their accounts.

“If you’re a member of a pro-Trump movement that’s donating hundreds of thousands of dollars and millions of dollars to this stuff, then you should be worried,” Attorney General David Lametti told CTV Power. Play at protests. , asked about the freezing of accounts.

Beaudoin said a police investigation was underway into money coming from abroad to support the protests.

He was among those who testified before the House of Commons finance committee for its study of the government’s use of the Emergencies Act to end lockdowns in Ottawa.

He said the RCMP tried to contact the protesters to warn them that their accounts could be frozen and to check whether they stayed at the protest or left.

The RCMP told MPs the force did not use emergency powers to stop the truckers’ insurance. They were questioned by the Commons committee on whether such a measure could have led to truck drivers illegally leaving the protests and causing an accident without insurance.

MPs also asked whether joint bank accounts had been frozen, affecting those not involved in the protests and their ability to pay rent and child support.

Mason told the committee that she was aware of the freezing of joint accounts. She said the Bankers Association had raised the issue of “humanitarian exceptions” with the government. But the Emergency Measures Act was quickly repealed and accounts quickly unblocked, so it became a “moot point”.

Russian nuclear exports: will they withstand the war in Ukraine?