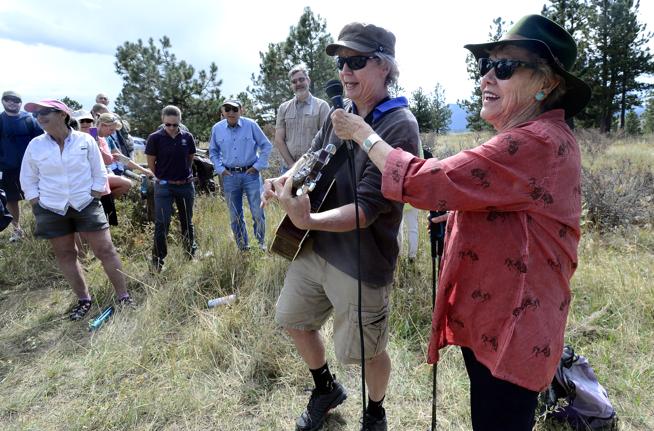 Jim Martin: What kind of leader do we need today? Look no further than Josie Heath

We could certainly welcome a good woman at this time to help bridge the nation’s political divide and advance pressing agendas.

We’ve had that kind of leader since 1970 right here in Boulder County. Josie Heath made history as a community activist, educator, public office holder, political candidate, and civic leader who was committed to improving the quality of life for all Colorado citizens.

She has an acute ability to look at things and suggest how to improve them, seeing things that others don’t.

Josie and her personality of problem-solving, fundraising and progressive ideas, coupled with her passion, tenacity, listening skills and ability to get things done come to mind. I bet she has even more energy than 10 other people combined. (She retired after 21 years at the Boulder Community Foundation Serving Boulder County in 2017.)

I’m a huge fan of Heath, who is known for her long-time work with the foundation. One of her proudest accomplishments was helping to establish the Millennium Trust in 1999 as a permanent fund of the foundation to meet the needs of county residents. The principle was to ask people to donate their last hour of income from 1999 to the trust. Overall, 6,100 residents donated a total of $1.8 million.

She pushed hard to push her ideas forward. His many involvements in political, community activism, and educational organizations and programs have been peppered with progressive proposals and accomplishments.

She is a visionary. When I met him in the mid-1980s, I was impressed by his kindness, sincerity, openness and positive attitude.

In a deeply polarized political arena, she managed to bridge the divide as one of the first trailblazing women to seek public office – not only in Boulder County, but also at the state level. She lobbied for more women to enter politics and run for office.

She has been married for more than 60 years to Rollie Heath, a former business executive. He was always there to cheer him on every step of the way and is well known for running for governor in 2002 against Bill Owens and for the eight years he served in the Colorado Senate. His service included time as Deputy Minority Leader. He helped make Boulder County and the state what it is today, including improving the education system from kindergarten through college.

The Heaths taught their children – Stratton, Kristen and Joel – the importance of civic ties and how to balance work and family. They were immersed in outdoor activities and their commitment to public service.

One of his major contributions to the Boulder County Commission was working alongside fellow commissioner Ron Stewart to update the county’s master plan in the mid-1980s. This was a controversial issue and the commission held more than 300 meetings in an attempt to gain public support.

Not everyone agreed. A Hygiene participant who opposed the plan named his pigs “Ron” and “Josie”. Moreover, during a meeting in Lyon, a man held up a rope and said: “We are here. We’re going to hang them all. Get those commissioners!

When Josie first ran for the US Senate in 1990, there were only two female senators. Also that year, she was one of only two women to run for the U.S. Senate; she was a Democrat and the other candidate was a Republican.

She cites a number of role models to show her how it’s done, including Ruth Correll and Janet Roberts, who both served on Boulder City Council, and Ruth Wright, a former minority leader in the Boulder Legislative Assembly. ‘State. She also thanks Jean Dubofsky, former Justice of the Supreme Court of Colorado, for his encouragement and Linda Shoemaker, President of the Brett Family Foundation, for her invaluable help with the Millennium Trust.

His extraordinary resume follows – and I had to omit items for space.

Elected to the Boulder County Commission (1982-1990), serving for eight years and being the second woman, after Maggi Markey, to serve on it. She was also the first woman to serve as chair of the board. It is said that she was one of the most effective county commissioners of all time.

President of the Boulder Community Foundation from 1995 to 2017. Her cash flow grew from $200,000 when she started to $25 million when she left – truly extraordinary. She oversaw the distribution of approximately $69 million in local grants. The organization also has an endowment of over $52 million. Josie was also a director and driving force behind the Millennium Trust.

President (and one of the founders) of the Boulder County Women’s Resource Center (1974).

She has served on numerous boards including Eco-Cycle, Boulder County YWCA, American Association of University Women and Colorado Commission.

One of the founders of the Boulder County Clean Air Consortium.

Few women ran for office in the 1960s and 1970s. But Josie did, paving the way for female candidates. In 1976, the wildly popular Republican Les Fowler defeated her in a race for the Colorado State Senate. She ran for the US Senate in 1990 as a Democrat, winning the primary race. Incumbent Hank Brown defeated her in the election. She ran for the U.S. Senate again in 1992, but lost in a three-way primary.

Director of the Denver Women’s Resource Center at the Red Rocks Campus of the Community College of Denver.

Inducted into the Colorado Women’s Hall of Fame in 2000.

She was appointed to the US Circuit Court Judicial Selection Commission.

She taught at the Institute of Public Policy at Harvard University Kennedy Center, emphasizing public service.

Josie has always been more interested in inspiring people to action rather than taking credit for it. She always followed her heart.

Bobby Kennedy once said that every good deed you do sends a small wave of hope. Josie’s wave has reached many people, especially those whose voices were not heard – minorities, women, the underprivileged and many others.

Josie Heath has changed many lives, more than most politicians do in one lifetime.

Jim Martin can be reached at [email protected]