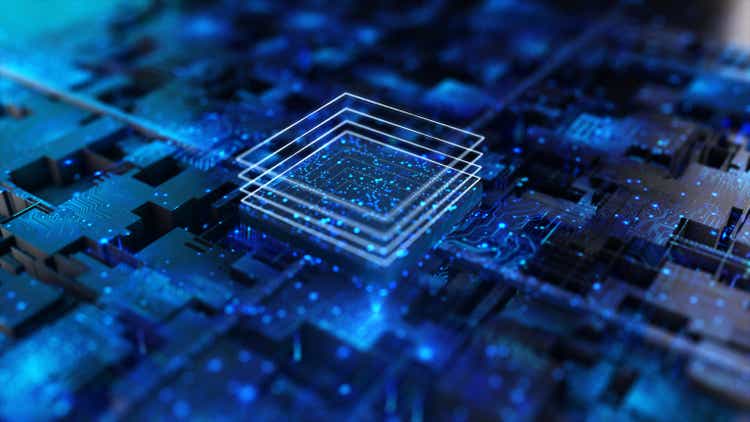 Time to look at Atos (OTCPK:AEXAF) (OTCPK:AEXAY). If there’s one thing I’m happy with, it doesn’t go much deeper into Atos here, as it contains my current negatives within reason. My position in the company remains little.

There’s really huge potential for Atos – and I’ll get into it and show you what I mean – but there’s also the question of what will be the catalyst for a turnaround in this business.

Let’s update the thesis here and see what we have for Atos.

Revisiting Atos and the down/upside

I have already tested Atos. It is a French multinational IT consultancy, born from the merger of a French giant and a Dutch giant a few years ago.

Headquartered in France, and while many American investors may not have heard of the company, it is a 21-year-old company with annual revenues of over $11 billion. euros, an annual revenue of 500 million euros and more than 50,000 employees worldwide.

The company’s heritage is part of what attracts investors here. The company currently includes former divisions of Siemens (OTCPK:SIEGY), Bull SA, Xerox IT, Syntel and others. The company has grown primarily through acquisitions and prior to its current iteration has consumed a number of attractive peers. What makes up Atos are qualitative companies with legacies in other qualitative companies. There is nothing wrong with segments of the business at a high level.

The company has been an investment horror show for about a year or so at this point, down 50-70% depending on where you look historically. There are reasons for this. The company’s credit rating deteriorated from BBB+ to BBB-. The problems don’t come from what the company does, but from how it does its job. The company issued a massive earnings warning in 1H21 and downgraded the entire guidance by the time I published my first article. This was followed by the long-awaited resignation of a CEO, replaced by Rodolphe Belmer.

The massive reorganization may have yielded some results, but it is far from over. The company is hiring massively, increasing its workforce by 16,000 people in 1H22 alone. Atos attributes 1H22 fiscal results to seasonal and market factors, including macroeconomics.

Book-to-bill factors have never been Atos’ problem. In 2Q22, it was back up to 101%, which very clearly indicates that yes, indeed, customers are ordering work done by Atos.

However, customers who order work are not enough.

This is not enough when over 6 months of turnover, the company achieves an operating margin of 1.1%, and half a billion FCF negative. Even order-to-invoice enhancements and order-entry enhancements don’t promise huge benefits — at least not immediately.

In 1Q22, we saw confirmation of its “2022 targets”, calling for stable revenue (0-1% growth) and an operating margin of 3-5%, one of the least impressive in the sector. . However, you will notice that for 1H22, the company is well below this target.

The company seems capable of attracting talent and has massive turnover at the moment. 16,089 new hires, with 12,370 departures, all translating into a net headcount of just over 112,000.

Atos plans to split its business in two – with Digital, Big Data/Cybersecurity, and the “new” Atos being Digital Infrastructure and Workplace Contracts. The latter is the traditional Atos, the former is the “growth company”.

Generally speaking, I’m a fan of spin-offs because it makes things and the appeal of a company a little more logical. It also allows me to invest in what I want. Take AT&T (T) for example. I’m glad I sold WarnerMedia at a high post-IPO valuation and reinvested most of it in AT&T, where it’s currently generating an impressive return.

Atos was able to secure funding for its transformation plan – it is now fully funded, which also partly explains BBB-. Atos reset its debt target to 3.75x net debt/OMDA, which is high for the sector. Another explanation of performance.

The company is targeting a legacy operating margin improvement of 600 basis points by 2026. This is an ambitious goal, and well into the future. So far, and with the current geopolitical context, I would consider these alleged targets to be inconspicuous.

The company confirmed its 2022E decline by updating its full-year target – expecting the 3% lower end of its OM guidance range. Essentially everything expected in the business is at the low end of the range, including a negative FCF of 150 million.

What’s going to be the turnaround here? What will drive Atos operating margin improvement?

A few things, I expected. Seasonality and macro are currently opposed at Atos. Supply chains are strained – and can be recovered. The company can work with price actions to improve margins, roll out its spring schedule, be more selective in hiring, and have ongoing cost discipline. This will result in an expected OM of 3.5% for 2022.

This will in turn result in FCF. But not yet on a truly “positive” or impressive level either.

The company still cannot guide for a positive FCF. Current expectations range from minus €150m to around €200m, at least potentially, which again isn’t all that impressive, reflecting the current share price and deteriorating valuation.

Yet with these trends, any improvement is a good improvement. However, these trends mean that there is no real visibility on when there will be any sort of fundamental improvement or turnaround, at least not from the company itself.

I wrote in my last article that I expect 2023E to be the turnaround year, seeing EPS revert to at least half of the 2020 level of €5/share. This would constitute 150% EPS growth, pursued by EPS improvements in 2024.

The corresponding increase in valuation and price would then result in triple-digit returns for this now BBB-rated company.

There is no doubt that this is a risky forecast and expectation. This is also why I am still not investing in Atos at this precise moment. It’s a high risk investment in the sense that we don’t know when a reversal will happen – although I think it’s well established that will come.

My Atos valuation models continue to show huge upside potential in all outlooks except P/E and dividend yield. That continues to make a lot of sense, because the P/E depends on earnings, which the company had very little of in 2021A, and the return depends on, you know, dividends, which the company cut.

The potential upside for Atos here is absolutely enormous – well over 200% in the case of even minimal standardization, even affecting the business by 40-50%. The same goes for EV/EBITDA. More importantly, any sort of non-dip, non-degraded EPS numbers and actual earnings call for a triple-digit upside in my DCF model.

This DCF model is now based on normalized earnings with growth of no more than 0.5% in sales and EBITDA, and a WACC of almost 10%. The implied EV/Share is well above €32/share here, implying significant upside potential, despite the company growing more than 2% since my last article.

Separating the business and looking at the individual components gives us a similar pre-split/spin-off view.

We value the components of the business – Infrastructure, Big Data, Business and Worldline assets – at multiples of quoted or industry-relevant pre-tax earnings, and this requires total gross assets of at least $8 billion. euros, even depreciated by another 20%. This brings us, net of debt and payables, to ~€5bn NAV, which per share amounts to ~€40/share.

You can update this NAV, the DCF or the EV/EBITDA as you wish. You won’t achieve the company’s current share price of $10/share unless you completely abandon logic and fundamentals.

Atos has made a lot of mistakes, and it’s currently being sold on a street corner for around a quarter or a fifth of its real value – a third if you undermine the company very conservatively.

I wrote in my last article that the only reason and I mean the only reason I don’t pour money into this business with massive conviction, it’s the very low predictability of this turnaround. I maintain this position.

The main reason for this is that the advice and history of the company is of no use. I can make estimates based on revenue history and trends, but at the end of the day, there are a lot of things going on that make this a difficult business to predict at this exact time.

The only thing I can say for sure is that Atos is worth much more than what it is currently traded for. It is, after all, the essence of being a dividend investor. For this reason, I view the business as a “BUY”, but highly speculative.

My thesis for Atos is as follows:

Remember, I’m all about:1. Buy undervalued companies – even if that undervaluation is slight, not massive – at a discount, allowing them to normalize over time and reap capital gains and dividends in the meantime.

2. If the company goes well beyond normalization and enters overvalued, I reap gains and rotate my position to other undervalued stocks, repeating #1.

3. If the company does not go into overvaluation, but is within a fair value, or goes back down into undervaluation, I buy more if time permits.

4. I reinvest the proceeds of dividends, labor savings or other cash inflows as specified in #1.

Here are my criteria and how the company meets them (in bold).

What skills should finance students be looking to learn in school?